As a general rule, those individuals who represent a low risk to public safety and who are sentenced to 365 days or less in the county jail are eligible for the Work Release Program. Work Release orders are reflected in days of jail time, with “Work Release Approved” in the order. Fines may also be converted into a jail sentence by the court. The rate of conversion can change from year to year, but will be specified at the time of sentencing, converting a dollar amount into days of custody. Credits for pre-sentence custody time will be specified, if applicable, in the sentencing order. Additionally, participants are entitled to conduct credits per 4019 of the Penal Code (good time/work time). The program provides manual labor as an alternative to confinement. Community beautification projects, landscaping, weed abatement, and clean-up are some of the services provided by Work Release for contracted cities and government agencies throughout the county. 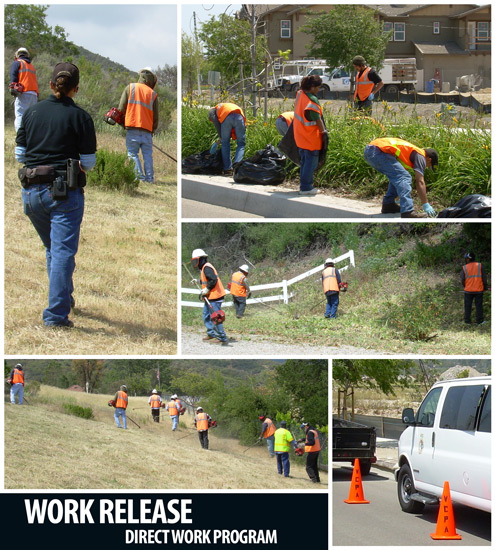 Several sections of the California Penal Code provide that community service which benefits the public may be imposed upon those convicted of certain offenses and violations of probation in lieu of incarceration or fine.  This is often the sanction chosen by the court when a fine would be inappropriate due to the defendant’s financial status or when the court determines that work with a community agency would have a greater impact on the defendant. The intent of the Direct Work Program is to offer an alternative sentencing option for the court in these cases.

We're currently offline. Send us an email and we'll get back to you, asap.

Type and press Enter to search